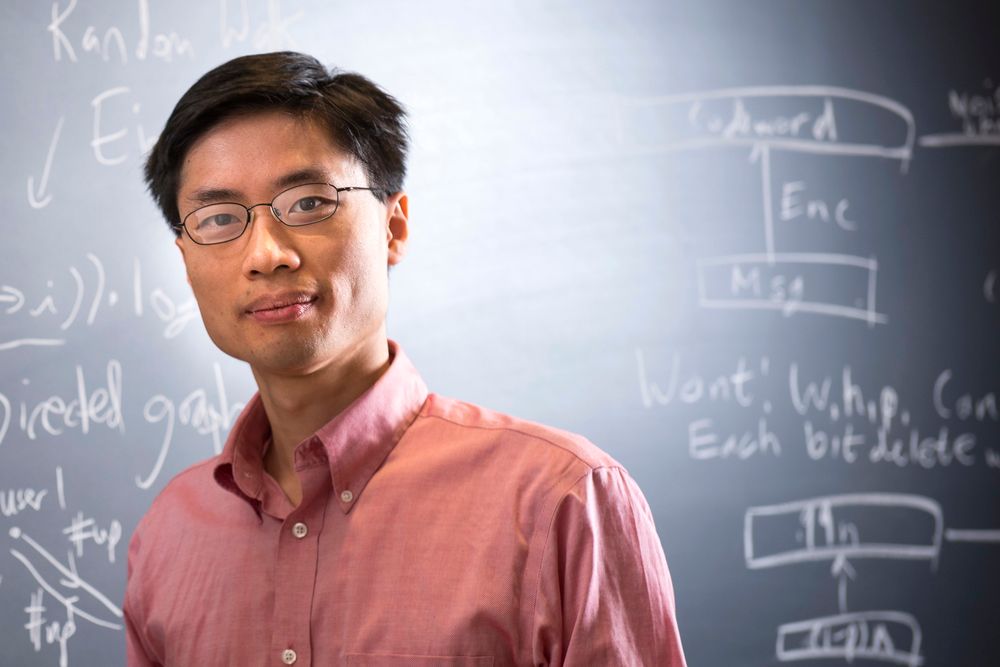 In July of this year, top-ranked high school mathematics students from more than 100 countries gathered in Chiang Mai, Thailand, to compete in the annual International Mathematics Olympiad. The team from the United States won, under the guidance of head coach and Caltech alumnus Po-Shen Loh (BS '04). The victory was the first for the United States in 21 years.

Loh, an associate professor in the department of mathematical sciences at Carnegie Mellon University (CMU), attributed the success to a number of factors, including a deeply talented team, a strong sense of collaboration among its members, and, perhaps surprisingly, harder problems. "Some of the problems this year were unusual," Loh says. "That leveled the playing field a bit, and our team was able to capitalize."

Loh has officially led the team for just over a year, but has been involved with the U.S. Olympiad for most of his career. A silver medalist in the 1999 competition in Romania after his senior year in high school, Loh credits his experiences in the Olympiad for inspiring him to attend Caltech, where his interest in mathematics only deepened. "Competitions are very different from pursuing math as a career," Loh says. "My professors at Caltech really inspired me to continue into research."

The types of problems that mathematicians work on, whether in academia, engineering, or finance, require deep collaboration, so we try to establish that culture early onThroughout his studies at Caltech, Loh remained committed to the Olympiad program, serving as an assistant coach on the team. "Right after graduation, my wife, Debbie Lee (BS '04), and I were married around the corner from Caltech, and the very next day, I was on a plane for that year's competition," he says.

The U.S. Olympiad team is sponsored by the Mathematical Association of America (MAA), which holds regional competitions throughout the year at which Loh and his fellow coaches identify potential team members. In the summer, the MAA hosts an intensive program where these prospects, along with dozens of other top students, hone their skills in a collaborative environment before heading to the international competition.

"The types of problems that mathematicians work on, whether in academia, engineering, or finance, require deep collaboration, so we try to establish that culture early on," Loh says.

Beyond helping the Olympiad team members, Loh is working to improve the mathematics literacy of students at all educational levels—all the way down to elementary school.

The pool of talented young mathematicians available to programs such as the Olympiad has become deeper in recent years—in part, Loh notes, because access to online materials has allowed self-starting, entrepreneurial students to leap into advanced mathematics at younger ages. "We have more students at age 13 taking calculus than ever before," he says.

However, according to a study published by the Pew Research Center, the United States lags behind other countries in math education, this year ranking 35th out of 64 countries in scores on the Program for International Student Assessment, a standardized test that measures 15-year-old students' literacy in reading, science, and math. "So while the most self-motivated students are able to flourish, unfortunately others are being left behind," Loh says.

Loh believes that adjusting the way math is taught and then tested may help, starting in elementary school. "Most math is generally taught in bulk segments, followed by a test, which is a high-stakes endeavor for the student," he observes. "They feel pressure with each choice, then must wait an extended period of time to find out what they did wrong. The sense of collaboration disappears. All this only serves to amplify the effect of a failure. Too many mistakes can be debilitating, causing students to just give up. But trial and failure is actually how we learn best, if we can make failure less costly."

To capitalize on the benefits of trial and error while sidestepping the pitfalls, Loh launched Expii, an online start-up offering web and smartphone apps meant to simulate the experience of one-to-one tutoring. Lessons, which are crowdsourced and vetted by Expii's users, are structured to lead a student along a series of rapid-fire questions and answers, offering immediate feedback as the student progresses. The company, launched last year, has already attracted a number of investors, including Adam D'Angelo (BS '06), founder of the website Quora, a popular knowledge base that aggregates users' questions and answers to topics.

"The idea is to let a student know right away if they're headed down the wrong path, so they can back up and try again. We create a process of trial, failure, and then rapid recovery," Loh says. This helps students to build confidence, which they then carry to higher-stakes tests.

Loh has at least one reason to believe in this method: "That's the process we use to train for the Olympiad."