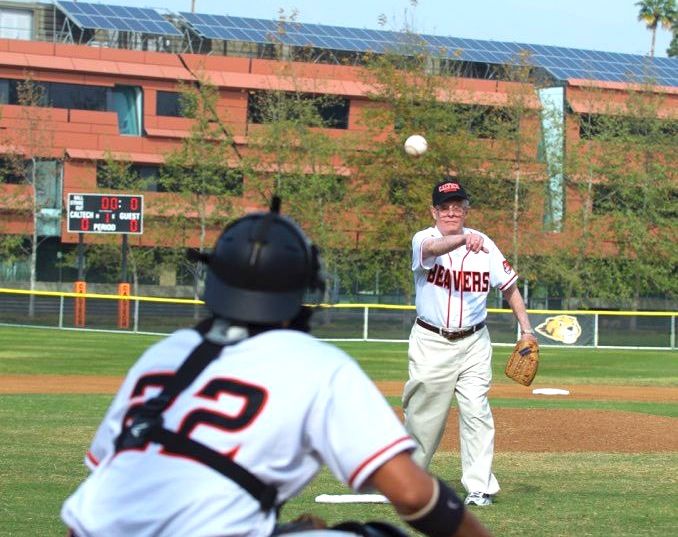 The last time that Mel Levet squared off against Occidental College in a baseball game, Franklin Roosevelt was in his second term as the nation's president and Gone with the Wind had just won the Oscar for best picture.

Now 97, Levet returned to campus last Friday to throw out the first pitch for Caltech against Oxy.

"I haven't pitched a baseball in 65 years," Levet said. "This is pretty exciting."

Family, friends, and members of the Caltech community turned out to celebrate. "This has blossomed into a great day for Caltech baseball and for Caltech. We're delighted to welcome Mel home," said Matt Mark, the Beavers' head baseball coach.

Levet attended Caltech from 1935 through 1940, earning his bachelor's and master's degrees in geology. He fondly recalls studying under Ian Campbell, who later became the geologist for the state of California. "One minute, I would be in a final having to identify minerals from the 200 or so in Caltech's collection," said Levet. "The next, I'd be running out to the baseball field. It was a wonderful time."

During his three years on the varsity squad, Levet led teams to 15 wins—including a 2–0 shutout of Occidental College in his final season. Levet became team captain his senior year, then coached the freshmen while earning his master's degree. In 1938, the Caltech baseball team recognized Levet's accomplishments with their most prestigious honor, the Rawlings Trophy.

"I made a vow to myself when I joined Caltech's baseball team: that I would become captain, and that I would win the Rawlings," said Levet. "I'm proud to say I did both."

World War II broke out not long after Levet's graduation, and he enlisted with the United States Army Air Forces, joining their burgeoning meteorology program. He held posts in numerous locations across the Pacific, including the Solomon Islands and Japan. After the war, Levet worked for several oil companies, including Chevron Corporation, where he spent the majority of his career as a research geologist. He retired from the company in 1982.

"In work and in life, my father has always been deeply curious," said Levet's daughter, Jan Le Pouvir, while she sat in the bleachers with Levet's family after the pitch. "He never stops asking questions. That inquisitiveness comes from Caltech. And in a way, I think it's the secret to his long life."

"Throughout his athletic career here, Mel displayed the qualities of ability, sportsmanship, and character that are hallmarks of the Caltech athlete," said Betsy Mitchell, director of athletics, recreation, and physical education at Caltech. "We're thrilled that Mel is still connected to Caltech and that he is able to share with our student athletes the lessons and memories he took with him from here into life."

Levet did not get to relish a win on Friday—Occidental bested the Beavers, 11–1—but he did not seem to mind. "A lot has changed, but the core of Caltech and its students is all just as I remember. It's a remarkable institution," he said. "I'd love to come back and get my PhD."