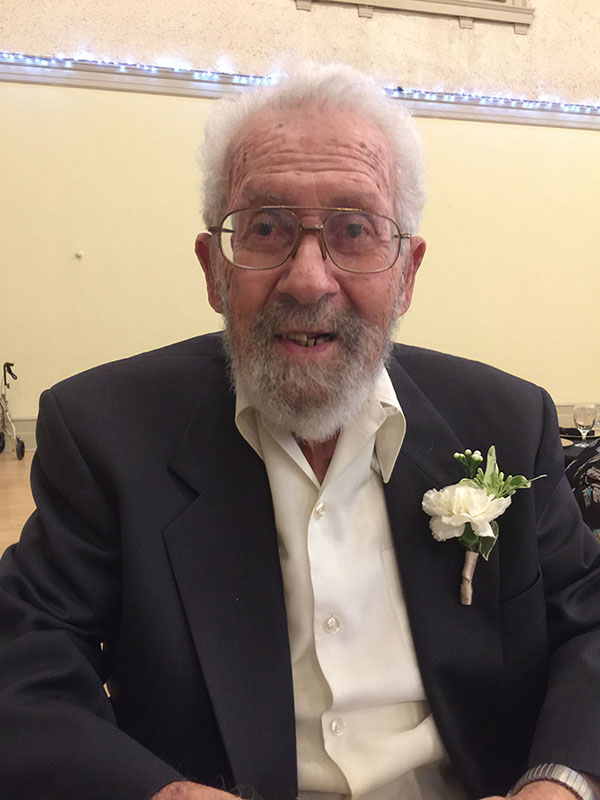 Jack William Schwartz, passed away peacefully in Hanford, CA on November 7, 2018. He was 103 years old.

Jack was born in San Francisco on April 28, 1915, the second of two children born to Adolph and Beatrice Schwartz. His family moved to Hollywood, California, where Jack attended Hollywood High School, graduating at the age of 16 in 1931. He then attended the California Institute of Technology (“Cal Tech”) during the Great Depression, where he earned a Bachelor of Science in Civil Engineering in 1935 and a Masters of Science in Civil Engineering in 1936. While at Cal Tech, Jack was on the crew that surveyed the site for the construction of the Mount Palomar Observatory.

After college, Jack worked as an engineer for the State of California Division of Highways and the U. S. Army Corps of Engineers.

Believing that war was coming, Jack joined the U.S. Navy’s Civil Engineer Corps in 1940 as a Lieutenant, junior grade, and was assigned to duty at Pearl Harbor. He was transferred to Guam in January, 1941. On December 10, 1941, three days after the Japanese attack on Pearl Harbor, the Japanese army invaded Guam. Jack was captured, becoming one of the first U.S. Prisoners of War. He was imprisoned at several prisoner of war camps in Japan until September 1945 when the American Army liberated the POWs.

After World War II, Jack continued to serve as an officer in the U.S. Navy until his retirement in 1962. In 1954, while stationed at the Key West Naval Base, Jack met the love of his life, Jeannette, and her daughter Joan. Jack and Jeannette were married shortly thereafter and his son, Jack Jr. arrived in September 1955. They enjoyed a full and rewarding life, traveling extensively throughout Europe when Jack was posted to NATO Headquarters outside Paris, France, in the late 1950s. Jack’s last posting was to Sandia Army Base in New Mexico, where he worked as an engineer on underground nuclear tests in Nevada. When Jack retired from the Navy, the Schwartz family, moved to Hanford.

From 1962 until 1980, Jack served as the City Engineer and Public Works Director for the City of Hanford. Jack brought a professional engineer’s background to his job. He was responsible for many upgrades to the city’s facilities, including the conversion of solid waste burning dumps to a modern landfill and transfer stations, and the construction of a new corporation yard. One of his proudest achievements was the construction of Hidden Valley Park, which was designed and constructed by employees of Hanford’s Public Works Department.

During the summers, Jack especially enjoyed YMCA Camp at Sequoia Lake with family and friends; his son and grandchildren, Michael and Colin, carry on his fondness for the Lake.

After Jack’s retirement, in between many travels throughout the world, Jack continued to serve the community on numerous boards and commissions. He served two terms on the City of Hanford Planning Commission and the Hanford Board of Building Appeals, five years on the Kings County Grand Jury, and three years on the Oversight Committee for the construction of the College of the Sequoias’ Hanford campus. His last community service was as a member of the City of Hanford’s Parks and Recreation Commission, where he served until he was 102, in 2017. He was honored that year with the Hanford Chamber of Commerce’s Lifetime Achievement Award.

Jack, an avid woodworker, was known in the area for his woodturning. He was a lifetime member of the Sequoia Woodturners. Until he was 102, he could be found turning bowls and goblets with his best friend, Don Wilcox. He was a member of the Veterans of Foreign Wars, the Fresno Chapter of the American Ex-Prisoners of War, and the American Defenders of Bataan and Corregidor.

In lieu of flowers, please consider a donation to the Fresno Chapter of the American Ex-Prisoners of War, or the Sequoia Lake YMCA Camp Redwood Capital Fund.