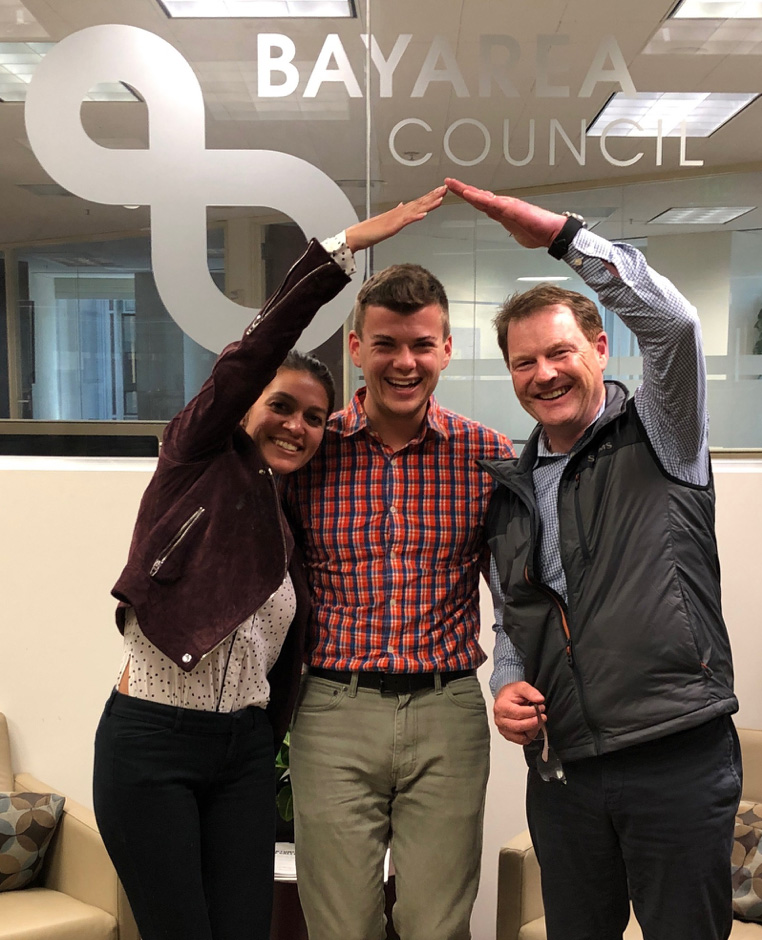 In May and June, I got a taste for the state legislative process. I’m more convinced that state policy changes, via legislation, are the necessary route for implementing a plurality of proposed housing crisis solutions. I also gained experience working with legislative stakeholders in bringing bills through the annual legislative process in Sacramento. However, the last two months were an inauspicious time for housing legislation.

One journalist coined the brilliant phrase “May Massacre” to describe what happened to 2019’s housing bills in Sacramento. Being in the Bay Area during that month was an incredible learning experience for me, since most of this year’s housing bills were introduced by Bay Area representatives in the state Assembly and Senate. I’m currently stationed at the Bay Area Council, a business association. (Thanks to alum Anthony Chong for making the connection for me!) Here, I have been immersed in the political process and witnessed successful and unsuccessful compromises.

Many of the victims of the May Massacre were pieces of legislation that resulted from the “CASA Compact.” An ad-hoc body known as the Committee to House the Bay Area produced this 10-point plan. It was supposed to represent a gold-standard compromise between, neighborhood groups, government, and developers. Elements of the plan fell under the “Three P” framework: protect tenants, preserve existing affordable housing units, and produce new housing units. The intent of the compromise was to act on all three components at once, thereby avoiding the trilemma that has beset efforts for substantive change in one area at a time. Some of the major plan elements included: passing a just-cause requirement for evictions, increased funding for subsidized affordable units, and strategically upzoning land to allow for more units. This would increase California’s overall supply of housing units while ensuring minimal disruption to existing communities from displacement or rent increases.

However, as my game theory classes at Caltech taught me, concerted action among players in an iterative strategic game is quite difficult. The California Legislature is no exception. The CASA Compact legislation package has nearly unravelled over the last couple months. Picture some Bay Area legislators carrying a Jenga tower to Governor Newsom’s desk for his signature, but at every committee hearing, a new group from somewhere else in the state plucks out a key block from the base. With the mentoring I’ve received from Bay Area Council housing experts, I’ve learned about the procedural intricacies that allow this to happen, the tactics of the groups most likely to demand concessions, and how some legislators address these hurdles.

The upshot for California is that housing policy is exceedingly difficult, especially since it doesn’t break down along party lines. Senator Scott Wiener, a Democrat from San Francisco, introduced the aggressive upzoning bill that would allow more multifamily development. Because of this, he is said to be in the pockets of greedy developers, despite his unimpeachable progressive credentials on every other issue. Meanwhile, Democrats representing wealthy suburban areas vote to maintain the existing character of their communities, despite professing a desire to help the needy. Their “local control” arguments almost exactly echo the sentiments of many Republicans discussing the federal/state dynamic. Meanwhile, some Republicans became allies of upzoning measures because of their desire to deregulate local land markets. Arguing over building bedrooms makes for strange bedfellows indeed.

Despair over legislation aside, some constructive things happened during the last two months as well. I joined the Casita Coalition, a grassroots statewide effort advocating for “casitas,” otherwise known as accessory dwelling units, granny flats, or in-law cottages. Statewide legislation legalizing casitas in most cities was passed in 2016. Since then, the number of casita permit applications has increased dramatically in some locales, but has remained flat in others, depending on the type of ordinance adopted by local governments. In Los Angeles, casitas made up 20% of all housing units permitted in 2018. I’m particularly interested in them since they represent the only “bottom-up” solution to the housing shortage. Building a casita is essentially a large home improvement project taken on by an individual homeowner. Building an apartment building requires the legal, financial, and construction expertise of being a professional developer, making large multifamily projects a “top-down” solution. In my work with the Bay Area Council and Casita Coalition, we are looking for legislative fixes to make the task of building a casita even less onerous for everyday people.

Another intriguing development over the past couple months in Northern California has been the saga between Stanford University and the government of Santa Clara County. Stanford is requesting permission to add 2.275 million square feet of academic space (about 2x as much space as our entire beloved Pasadena campus!) over the next 20 years, in addition to new student housing facilities. However, the Santa Clara County planning staff has determined that the expansion of Stanford’s academic space would create the demand for 2,172 housing units for non-students, such as new faculty members, maintenance workers, and administrators. County staff has recommended that approval of Stanford’s academic space expansion be conditioned upon Stanford building a corresponding 2,172 workforce housing units. This political fight reeks of bad economics. The county’s proposal sees housing demand as an externality to be mitigated, rather than an opportunity to be addressed by the housing market. I won’t deny that the housing market is extraordinarily distorted in Silicon Valley, but this remedy would only distort it further. I testified twice against the county’s position at the Planning Commission meetings, and I will continue to follow the latest developments for the rest of my time in Northern California.

I’ll be in Northern California for four more weeks, continuing to learn from the people up here. In my own opinion, folks from up here seem to think they’re in charge of the whole state. With a former Mayor of San Francisco as Governor, and housing bills being carried almost exclusively by Bay Area legislators, Southern California feels under-represented. I will be considering strategies to bridge this gap once I move back to Los Angeles.

Stay tuned for my next and final update to hear about my international fact-finding mission, as well as a prototype app I’m working on. You can continue to follow along with my analysis and awareness efforts on my Medium and Instagram channels: