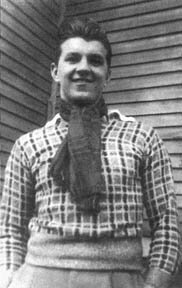 Tom was born in Williamsburg, Iowa, moving with his family to Chicago in 1928. He was a member of the National Honor Society each year at Fenger High School. Though active on the wrestling team, he was especially proud of playing on the Fenger High All-City Championship football team in 1938. He continued playing football for Knox College in Galesburg, Illinois, working his way through all four years on a grant-in-aid scholarship, graduating with a Bachelor of Arts degree in 1943. He immediately joined the Marine Corps and saw active duty in the Marine Air Warning Squadron (MAWS-7) as an officer and radar specialist in the Pacific Theatre during World War II, achieving the rank of captain. He remained in the Marine Corps Reserve until honorably discharged in 1957.

Returning home after the war, Tom attended the California Institute of Technology (1946-48), near where his family had moved during the war. Tom received his Master of Science degree in 1955, seven years after leaving Caltech, upon the acceptance of his Master’s thesis detailing the groundwater geology in Pauma Valley, California. During his final year at Caltech, he met Phyllis Verlie, whom he married in 1948. They were devoted to each other for the next 47 years, until her passing in 1995.

In 1948 Tom started his career as a geologist at Chevron Oil, where he worked for 43 years, retiring as a senior VP of exploration. As an exploration specialist, he was transferred frequently, with postings in Louisiana, North Dakota, Wyoming, California, Montana, Texas, Canada and Norway, finally serving in Louisiana again before retiring to Santa Rosa, California, in 1983.

Tom was an incredibly honorable, determined and generous man, highly respected by his many friends, extended family and community. He coached Little League Baseball and volunteered at his church. He remained physically fit all his life and enjoyed fly fishing, bird hunting, handball and golf. He was an avid reader and kept up on all current events. Showing off his Welsh roots, he sang with a barbershop choir. He enthusiastically supported his kids and grandkids in every endeavor. To his children, he was an advisor, a confidant, a debater and a comforter, and we were privileged to have his presence in our lives for so long.

Tom leaves behind his second wife, his sister, three children, six grandchildren and one great-grandson.