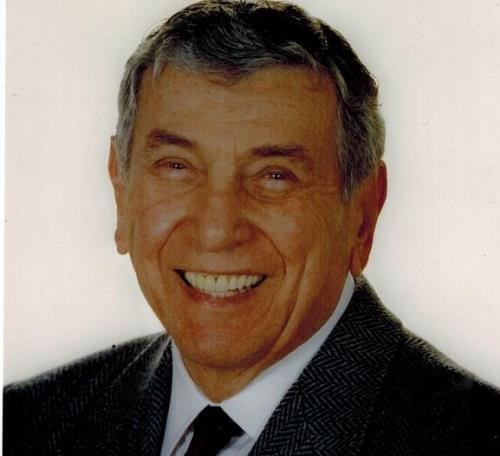 Welko Elton Gasich of Los Angeles, California, passed away on Friday evening, January 14, 2022, of heart failure with his beloved wife by his side.

Welko was born March 28, 1922, in the small farming community of Cupertino, California, to Elija and Catherine (Paviso) Gasich. His father was an orchardist, and during Welko's youth he worked very hard picking fruit and driving the tractor. When he was ten year's old, his Uncle Louis Paviso gave him a flight in his airplane and that was the beginning of Welko's interest in aircraft.

Following Welko's graduation from Palo Alto High School, he received his B.A. Degree (cum laude) in Mechanical Engineering from Stanford University (Bacon Scholar) in 1943. His graduate studies were in­terrupted by World War II when he served in the United States Navy as a flight test engineer achieving the rank of Lieutenant. As an officer on detached duty with NACA (National Advisory Committee for Aeronautics), he was placed at Moffett Field to correlate the P-39 flight test results of drag divergence Mach number with wind tunnel tests. He also was the project engineer in charge of propeller tests on the XSB2D-1 single-engine airplane that eventually crashed due to engine failure. Both he and the pilot survived, but the airplane was destroyed. After his active duty in the U.S. Navy (1944-1946),he continued in the U. S. Naval Reserve until April, 1954, at which time he was Honorably Discharged.

At the beginning of his professional career, Welko worked for the Douglas Aircraft Company, El Segundo Division, El Segundo, California. While there he worked in the fields of aerodynamics and aeroelasticity on a variety of aircraft. For three years he worked at the Rand Corporation, Santa Monica, California, as Chief of Aircraft Design on various aircraft programs in support of the United States Air Force. Welko was asked to join the Northrop Corporation in 1953 where he remained for the next thirty-five years. His first assignment at Northrop was Chief of Preliminary Design. He had a major role in Northrop's conception and development of the U.S. Air Force's lightweight supersonic jet trainer, the T-38 Talon, of which he was a co-patentee. The T-38 entered service with the USAF in 1960 and, due to its outstanding performance, it is still in service today. He was also intimately involved in the design of the F-5 (co-patentee) as well as the F-5A, and the F-5E supersonic fighters. In 1956 he was promoted to Director of Advanced Systems and in 1961 to Vice President of Engineering and Assistant General - Manager Technical.

Following his return to Northrop from the Sloan Executive Program at Stanford University, he was General Manager of Ventura Division. While there he managed subsystems such as the parachute recovery system for Mercury, Gemini, and Apollo space vehicles. In 1971 he returned to the Aircraft Division of Northrop as General Manager. He worked on the NASA M-2 and HL-10 space recovery vehicles as well as the A-9, YF-17, F-18 fighters and the early work of the B-2 bomber. Thereafter, he was appointed a Corporate Officer and Senior Vice President of Advanced Projects. In 1985 he was elected Executive Vice President of Programs until his retirement in September, 1988.

Welko was elected to the prestigious National Academy of Engineering for his work on supersonic aircraft design and leadership in the engineering field. He was a member of the Joint Strategic Target Planning Staff (JSTPS) Scientific Advisory Group. He was also elected to the grade of Fellow of the American Institute of Aeronautics and Astronautics. He was national president of the Stanford Business School Alumni Association and past chairman of the Stanford Engineering Advisory Council. He also served on various other university engineering advisory boards. He is the author of various articles on technical subjects and engineering management. The Society of Automotive Engineers, Inc., (SAE) elected Welko to the grade of Fellow for his accomplishments in the field of automotive engineering. He served as a member of the SAE Board of Directors for several years. He was a member of the Conquistadores del Cielo for 50 years. He was a member of the Bel-Air Country Club for 48 years. Welko's community activities included serving the Boy Scouts of America as Chairman of the Scout-O-Rama for Los Angeles County and serving as Chairman of the Explorer Scout Executive Committee. He also served as the United Way Fund Chairman for Southwestern Los Angeles. In 1994 he became a founding member of the Petersen Automotive Museum and one of the original checkered flag 200 members. Upon his retirement from aerospace, he had more time for his avocation - automobiles. One of his lifelong ambitions was to study the key factor in determining the horsepower output of racing engines. After two years of research on Ferrari engines, he determined that bore/stroke ratio was a powerful index of engine performance. He authored the book "Forty Years of Ferrari V-12 Engines" published by the Society of Automotive Engineers. Welko was preceded in death by his brother Jon Gasich. He is survived by his loving wife Patricia (Gudgel) Gasich, his son Mark David Gasich, and many cousins throughout America and Serbia. Burial was private as Welko wished. He is greatly missed and shall never be forgotten.