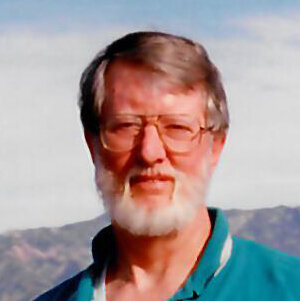 Miles William McLennan was born in February 1938 to Miles Ayrault and Ethel Frances McLennan in Detroit, MI and grew up in Dayton, OH with his little sister, Francis. Bill, as he was known to friends, graduated high school at Culver Military Academy in 1956. He turned down acceptances to Princeton and Harvard to attend Caltech in Pasadena, CA, where he married the love of his life, Rae Ann, and graduated with an Astronomy degree in 1961. Bill and Rae Ann moved to Santa Barbara, CA so Bill could work at Delco Electronics. Along the way, they had 3 children; Anne E, M. Robin, and Miles D McLennan.

Bill worked as an ‘Underwater Acoustical Engineer’ which meant he pioneered approaches to use and measure sound to render naval vessels less detectable. As one of the earliest programmers in FORTRAN, Bill wrote the software to guide the unspooling of communications cable from ships to the contours of the ocean floor. He conducted this work at locations all over the world but was primarily based on a tracking range off Santa Cruz Island just west of Santa Barbara.

Bill spent a great deal of time on Santa Cruz Island and was quite taken by its pristine beauty. He also had many heartfelt passions such as classical music, astronomy, reading science fiction novels, amassing an extensive comic book collection and exploring his clan McLennan ancestry and familial roots. He regularly attended the Santa Barbara Symphony with his dear friend Elizabeth and donated to numerous charitable causes over the years, including Caltech.

Miles William McLennan passed away after a brief hospitalization on November 2, 2019 at the age of 81. He is remembered as an unusually humble, kind and generous man leaving a cherished living legacy shared among in his children, family and friends. Bill is survived by his 3 children and wife of many years. An intimate family memorial service was held in Dallas Texas at his recent place of residence shortly after his passing.

For anyone wishing to contribute to Bill’s memory, Anne E, M. Robin, and Miles D McLennan invite you to join them in a donation in their father’s name to Santa Cruz Island via The Nature Conservancy to commemorate his love of the island and desire to preserve it. All donations in the name of ‘Miles W McLennan’ are tax deductible and earmarked exclusively for use at Santa Cruz Island.