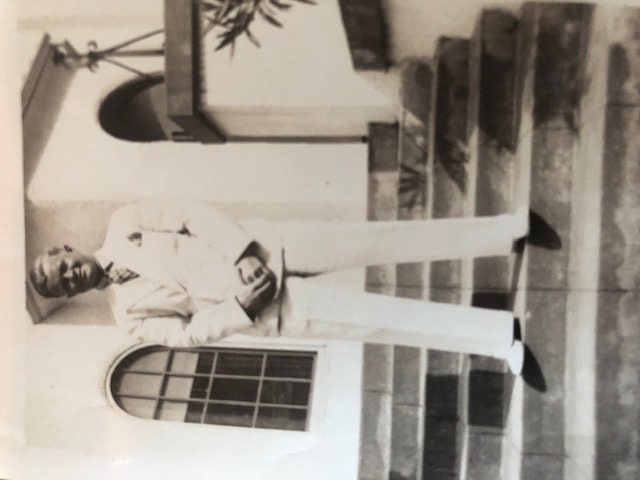 Born on September 7, 1918, in Wilkinsburg, Pennsylvania, at age seven Joe’s family moved to California, where he grew up in South Pasadena and San Marino.  Joe remembers his father leading him by the hand down the Olive Walk at Caltech, telling him this was where he would go to college and what’s more, become an engineer.

Joe did just that and lived at Ricketts House, played on the varsity Tennis team, and served as Class President his Sophomore and Senior years.  The next year, while working in management at U.S. Steel Corporation, Joe met his wife, Anne Beech, a Stanford graduate, while teaching a night class in Industrial Relations under Caltech’s Professor Bob Gray, for whom Anne was a secretary.  They married in February of 1943 and started their family, followed by Joe serving the last two years of World War II in the Navy.  Anne and Joe moved to San Marino to raise their three children, Joseph, III (“Jeff”), John (“Jack”) and Katharine (“Taffy”).

Around 1950, when Joe was President of the Caltech Alumni Association and allegedly started the Alumni Fund, Joe solicited Dr. Arnold O. Beckman for a donation, and Dr. Beckman later joked that it cost him less money to hire Joe to work for his company.  During Joe’s tenure in upper management at Beckman Instruments, Dr. Beckman asked him what he thought would make a nice gift to Caltech, and Joe suggested an auditorium!  Throughout the years, Joe enjoyed organizing various class reunions, including the 50th and 55th for the Class of ’41, and he and Anne loved taking trips with fellow alumni as members of the Associates President’s Circle.  When it came time to move to the retirement community, Mount San Antonio Gardens, in Claremont/Pomona, they were honored to give their house to Caltech in a Charitable Remainder Trust.

Joe took pride in working steadily from age 17.  At age 50, he enjoyed buying a struggling company, DB Products, in Pasadena, which manufactured electronic transformers, and he built it up from 25 to 150 employees, adding a division that designed and built Microwave Switches.  But, he also liked the challenge of making necessary changes at certain times.  Joe reluctantly sold his company at age 84, seven years after moving to the retirement community, from where he continued to drive to Pasadena every morning.

Caltech graduates continue to contribute to their communities, and Joe was named “Outstanding Citizen of San Marino” in 1986, for his volunteer work, including two terms on the Board of Education, eleven years as a City Councilman, and over twenty years as a Rotarian.  Anne also enjoyed volunteering in various activities and leadership roles, and as they were preparing to move to Claremont in their mid-70s, both Joe and Anne were honored as San Marino’s “most distinguished couple” by Rotary Club for their “four decades of service above self.”  Joe always remembered Caltech with great fondness and died on February 20, 2013, at age 94.