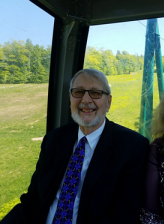 Stuart Goff, 81, a resident of Keene and formerly of Georgia died on  Sunday, May 5, 2019. He passed peacefully in the comfort of his home  with the love of family near.

Stuart was born the son of the late Elsie (Winer) and Jack Goff on  August 27, 1937 in Brooklyn, NY. After his mother’s death, his father  remarried and Shirley Goff became the woman who helped raise him. He was  educated in California where he graduated from North Hollywood High  School class of 1954. Stuart went on in his studies earning a Bachelors  & Masters of Science in Physics from California Institute of  Technology class of 1958. Education was important to him. He earned his  Ph.D. in Mathematics from the University of Massachusetts.

On December 28, 1996 he exchanged vows with Sandra Peterson Loveland  in Roswell, Georgia. They were married in a simple service with close  family and friends in attendance and have been married for twenty-two  years.

Stuart was employed by Keene State College as a Professor of  Mathematics. He worked at KSC for thirty years before retiring in 1999.
He enjoyed playing bridge where he rose to the level of Gold Life  Master. Stuart was a long-time member of the American Contract Bridge  League. He was a collector of art and a fine wine enthusiast. Time was  spent traveling and he enjoyed the challenge of completing the New York  Times crossword puzzle.

Mr. Goff leaves his wife, Sandra P. Goff of Keene. His children;  Steven Goff and his wife, Karen of Reston, VA. Philip Goff and his wife,  Liza of Arlington, MA. Samuel Goff and his wife, Erin of Manchester By  The Sea, MA. Children from a combined marriage; Jonathan Loveland and  his wife, Melissa of Irvine, CA. and Christina Villeneuve of Marlborough  NH. He leaves a sister, Claudia Watson and her husband Robert of  Rochester,NH. A daughter in-law, Jennifer Loveland of Sacramento, CA. In  addition, he is survived by; nine grandsons, cousins, nieces, nephews,  extended family and friends. Stuart is pre-deceased by a son from the  combined marriage, Andrew Loveland who passed on March 8, 2018 and a son  in-law, David Villeneuve who passed on May 18, 2016.

In keeping with Stuart’s wishes all services will be private. Donations can be made in memory of Stuart Goff to:

All services are under the care of Cheshire Family Funeral Chapel and  Crematories, 44 Maple Ave. Keene, NH. 03431. WW.cheshirefamilyfh.com