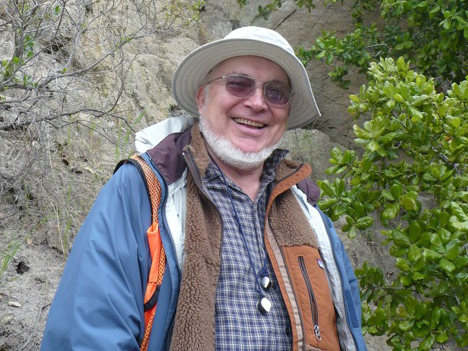 The arid plateau of central Arizona, the locale of Eldridge Morton Moores’s formative years, would seem to offer an ideal education for a budding geologist, with so much of the earth’s skin exposed and visible to the curious eye. But at the time, that outcome seemed as remote as the little town of Crown King.

His eponymous father wanted him to join the family business, which was mining and hauling, and was suspicious of geologists. As a young teenager, Moores was enlisted to help in the various mines and in driving a wide variety of vehicles. He learned how to shift a manual transmission without the benefit of a clutch, and he developed a lifelong interest in vehicles. At 16, he graduated from the Phoenix High School (there was no high school near Crown King), and, eager to escape the small town of his childhood, he matriculated at the California Institute of Technology.

He could not major in history or music at Caltech and after a brief go with engineering courses, he decided against the major his father would have chosen for him. Conversations with his Resident Adviser sparked the idea of majoring in geology, the value of which was borne out by two summers working in Alaska. His admittance as a graduate student to the geology department at Princeton University cemented his career path.

At Princeton, he was present at the birth of the modern theory of plate tectonics, studying under one of its fathers, Harry Hess. His field research in Nevada for his PhD thesis was followed by research as a postdoctoral fellow in Vourinos, Greece, on the ophiolite complex there. This work, and subsequent work on the Troodos complex on Cyprus while a tenure-track professor at UC Davis, led him to his important contributions to plate tectonics theory. The idea that the earth’s crust was composed of large pieces—the tectonic plates—that move around relative to one another was not new in the 1960s, but it was becoming newly accepted. The work of Moores and others explained how new oceanic crust was being created at the deep-sea mid-ocean ridges and how some plates were subducted beneath adjacent plates.

Moores was hired by the young Department of Geology at UC Davis in 1966, where he stayed the remainder of his career, including as emeritus professor since 2003. In 2011, UC Davis awarded him the honorary title of Distinguished Professor Emeritus. He was a dedicated teacher, served for a time as department chair, and continued his research, publishing his most-widely cited article in 1991, on the SWEAT hypothesis, in which he proposed that a similarity of rocks existing in the Southwest United States and in East Antarctica was evidence for the existence of an ancient supercontinent in which these landmasses had been joined together.

Subsequent studies by other scientists found further corroborating evidence, and the pre-Pangaea super continent was dubbed Rodinia. Over the years, he also became the go-to authority for news media on geology related issues in Northern California, most recently explaining the failure of the Oroville dam spillway.

As his career progressed, he picked up new skills along the way: an instrument here (piano), a language there (Greek, which eventually surpassed his knowledge of French and German). Most importantly, he picked up a life partner. He met his wife-to-be, Judy (née Riker), at a changepartner dance at Mount Holyoke College in South Hadley, Massachusetts, not long after returning from his first stint in Greece; three weeks later they were engaged. Raising three children (Geneva, Brian, and Kathryn), she also kept the household—whether it was in their house in Davis or at a field camp in Greece—and served as his key support system and sounding board. Together (along with Lauret E. Savoy) they edited Bedrock: Writers on the Wonders of Geology.

Moores played a role in many other publications as well. He wrote or co-authored more than 130 scientific papers, and with fellow UC Davis geologist Rob Twiss, he wrote a two-part geology textbook: Tectonics and Structural Geology. From 1981-88, he served as editor of Geology, a journal of the Geological Society of America (GSA) and made it one of the most popular journals in the field. He also edited or contributed to a number of general-audience works about geology. But arguably the most famous book in which he played a part was Assembling California, by John McPhee (the final volume of McPhee’s four-volume Pulitzer-prize- winning Annals of the Former World). Assembling California introduced thousands of people to geology, and Moores, along with his wife Judy, led numerous field trips explaining the geology of Northern California to many of them.

He was a world traveler, not just for his research, but also as a leader of national and international organizations. He served as GSA president, and subsequently as Vice-President of the International Union of Geologic Sciences. Among numerous other geologic studies, he served as Co-Chief Scientist on the 1993 JOIDES Resolution cruise in the eastern Mediterranean.

He never stopped his involvement with music: playing the cello in the UC Davis Symphony for 28 years and sometimes in the field on a specially designed “traviello” that packed up into a small box for easy transport; lending his perfect pitch to the Unitarian Universalist Church choir bass section; and playing piano with friends. In addition to his wife, and three children, Moores leaves behind his three de Boor grandchildren: Corwin, Jasper, and Malva. Just as he had loved and admired his children for their careers and many accomplishments, Moores loved his grandchildren deeply and was proud of their musical and scholarly success, too.

His death, which was unexpected and tragic, occurred in the Feather River canyon area, in the middle of his favorite pastime—leading a field trip, sharing his knowledge and excitement about geology.

In lieu of flowers, donations may be given to one of the following:

•  Or contact Charlene Mattison, Assistant Dean, College of Arts and Sciences, at 530-754-2225 or cmattison@ucdavis.edu.