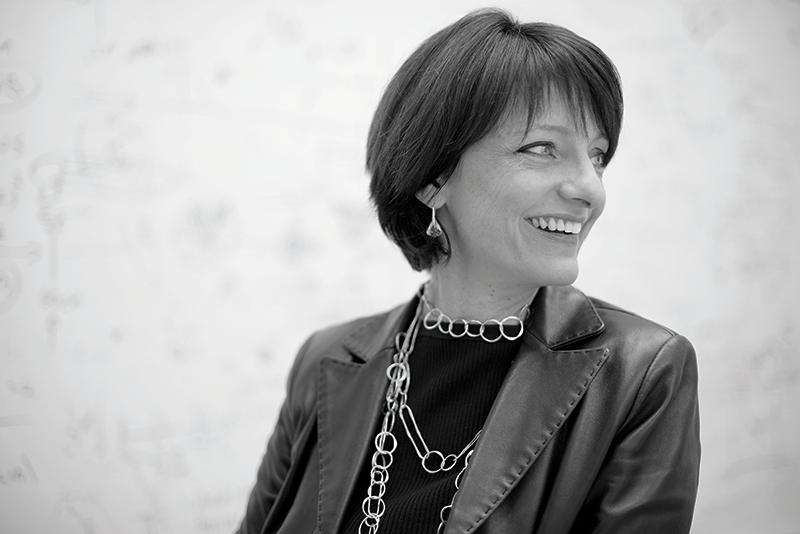 For her sustained record of leadership and innovation in technology and business.

Throughout her career—as the first woman to become director of the Defense Advanced Research Projects Agency (DARPA), and as an executive in technology—Dugan has spearheaded groundbreaking initiatives in the fields of cybersecurity, social media, and advanced manufacturing methods.

In a talk at the 2012 TED (Technology, Entertainment, Design) conference, Regina Dugan explained her fundamental belief that taking risks—and overcoming the fear of failure inherent in doing so—is necessary to achieving seemingly impossible results. “Failure is part of creating new and amazing things,” she said. “We cannot both fear failure and make amazing things.”
This idea has guided Dugan through much of her life, including during her graduate work at Caltech, which she characterizes as being far from easy.

“The work demanded more of me than I thought possible. It was intellectually challenging. It was scientifically disorienting at times. It required me to think differently and to earn the confidence—through imagination and the grit of hard work—to question conventional wisdom.”

After receiving her PhD in mechanical engineering, this curiosity and habit of challenging the status quo led Dugan to join DARPA, an agency known for creating breakthroughs, including the ARPAnet—now known as the Internet. She served as DARPA’s first female director from 2009 to 2012.

After DARPA, Dugan led the Advanced Technology and Projects (ATAP) team at Google, where she worked on a range of technologies in the areas of modular phones, wearable technology, and virtual reality, including new forms of storytelling. This work received multiple Annie Awards (animation’s highest honor) and an Oscar nomination.

Currently, Dugan leads a product development team at Facebook called Building 8. The goal of Building 8 is to create and ship category-defining consumer hardware and software products that are social first.

According to Dugan, we don’t talk much about it because the discussion often goes like this: “If you were just strong enough, if you had enough willpower, you would put down the addictive drug that is your smartphone and honor the conversation in front of you.”

Dugan continues to say that it’s the wrong narrative—and a false choice.

It’s the chance to reject these kinds of false choices and create new solutions that brings Dugan energy and excitement.

“The future is not a story of inevitability … with us as passive participants in its unfolding. Rather, it is a story that is actively written … with us as engineers and architects in its building.  The future is what we choose to build.  And we build what we believe in.”

Regina Dugan announced on October 17, 2017, that she will be leaving Facebook in early 2018 to focus on building and leading a new endeavor.  She said “It was Kennedy’s words, delivered more than 50 years ago, that inspired me:

‘The world is very different now. United, there is little we cannot do … divided, there is little we can do. Let us begin anew—remembering on both sides that civility is not a sign of weakness. And if a beachhead of cooperation may push back the jungle of suspicion, let both sides join in creating a new endeavor, where the strong are just and the weak secure. This will not be finished in the first 100 days. Nor will it be finished in the first 1,000 days. Nor even perhaps in our lifetime. But let us begin.’